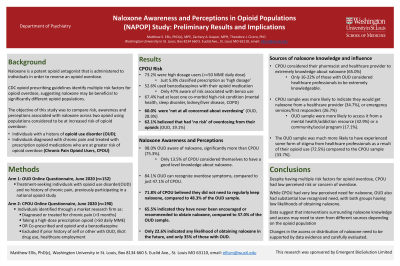 Matthew S. Ellis, PhD(c), MPE, Zachary A. Kasper, MPH, Theodore J. Cicero, PhD
Washington University in St. Louis, Box 8134 660 S. Euclid Ave., St. Louis MO 63110
Purpose
Naloxone is a potent opioid antagonist that is administered to individuals in order to reverse an opioid overdose. Although those with opioid use disorder (OUD) are widely considered to be at elevated risk for opioid overdose, CDC opioid prescribing guidelines identify a number of other risk factors for opioid overdose within the therapeutic sphere, suggesting naloxone may be beneficial to significantly different opioid populations. The objective of this study was to compare risk, awareness and perceptions associated with naloxone across two opioid using populations considered to be at increased risk of opioid overdose; Individuals with a history of opioid use disorder (OUD); Individuals diagnosed with chronic pain and treated with prescription opioid medications who are at greater risk of opioid overdose (Chronic Pain Opioid Users, CPOU)

Methods
A questionnaire was developed to asking about opioid behaviors, knowledge and perceptions of opioid overdose, and knowledge, attitudes and perceptions of naloxone. This questionnaire was distributed to two samples of opioid users for a one month period in June 2020. The first arm (OUD arm) of the survey was a sample of treatment-seeking individuals with opioid use disorder, recruited from a national opioid surveillance study (n=152). The second arm (of the study included individuals diagnosed with chronic (> 3 months), currently being treated with an opioid prescription, and considered to be at greater risk for overdose. This was defined as having a daily MME equivalent of greater than or equal to 50 MME per day, or being co-prescribed and taking an opioid prescription of any dosage and a benzodiazepine. In order to eliminate potential confounders, those with self or close personal experience with opioid use disorder, overdoses, illicit substance use or problematic opioid use, in addition to employment in the healthcare sector, were excluded from the final sample (n=190).

Results
Assessing the risk of CPOU patients, while the majority of the CPOU arm (73.2%) were high dosage users (>=50 MME daily dose), just 5.8% perceived their prescription as ‘high dosage.’ In addition, 52.6% used benzodiazepines with their opioid medication, with less than half of these users (47%) aware of the increased risk of overdose associated with benzodiazepine use. Finally, 67.4% had at least one other co-morbid high-risk condition (mental health, sleep disorder, kidney/liver disease, COPD). Despite these risk factors, 60.0% were ‘not at all concerned about overdosing’, compared to 28.9% in the OUD arm, and 62.1% believed that had ‘no risk’ of overdosing from their opioids, compared to 19.1% in the OUD arm.

Individuals in the OUD arm were near universally aware of naloxone (98.0%) compared to the CPOU arm (75.3%). However, despite a fair amount of awareness among CPOU, only 13.5% of CPOU considered themselves to have a good level knowledge about naloxone, and only 47.1% indicated they could recognize any symptoms of an opioid overdose (compared to 84.1% of OUD). Perceived need to access or carry naloxone was low, with 71.8% of CPOU believing they did not need to regularly keep naloxone, compared to 48.3% of the OUD sample, and Only 22.6% indicated any likelihood of obtaining naloxone in the future, compared to 35% of those with OUD.

When examining sources of naloxone knowledge and influence, the CPOU arm considered their pharmacist and healthcare provider to extremely knowledge about naloxone (65.0%), whereas only 16-22% of those with OUD considered healthcare professionals to be extremely knowledgeable. The CPOU sample was more likely to indicate they would get naloxone from a healthcare provider (34.7%), or emergency services/first responders (26.7%), while the OUD sample were more likely to access it from a mental health/addiction resource (32.9%) or a community/social program (17.1%). Finally, the OUD sample was much more likely to have experienced some form of stigma from healthcare professionals as a result of their opioid use (72.5%) compared to the CPOU sample (33.7%).

Conclusions
These data suggest there are distinct user groups that could benefit from naloxone. Importantly, despite having multiple risk factors for opioid overdose, the CPOU sample had very low perceived risk or concern of overdose. As a result, CPOU had very low perceived need for naloxone. Interestingly, despite significant awareness and knowledge of their opioid overdose risk, the OUD sample also had substantial low recognized need, with both groups having low likelihoods of obtaining naloxone. Our data suggest that changes in the access or distribution of naloxone can, and should be, data-driven. For instance, Interventions surrounding naloxone knowledge and access may need to stem from different sources depending on the opioid population, with the healthcare profession being a potential source of naloxone distribution or recommendation for individuals with chronic pain taking an opioid prescription, and community or harm reduction workers as an avenue for individuals with opioid use disorder.

This study was sponsored by a grant from Emergent BioSolutions Inc.