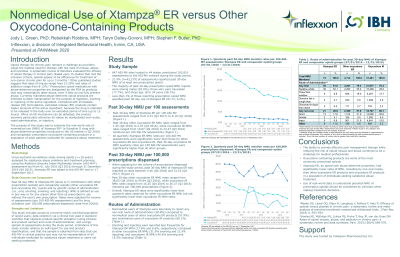 Inflexxion, an IBH Company, Irvine, CA, USA
Purpose
Opioid therapy for chronic pain remains a challenge as providers weigh the medical need for therapy with the risks of misuse, abuse and overdose. A systematic review of literature evaluated the efficacy of opioid therapy in chronic pain. Based upon 15 studies that met the inclusion criteria, opioids appear to be efficacious for treatment of non-cancer chronic pain for up to 3 months. Other published studies suggest that rates of misuse range from 21-29% and rates of addiction range from 8-12%. Prescription opioid medications with abuse-deterrent properties are products designated by the US Food and Drug Administration (FDA) as products that may meaningfully deter abuse, even if they do not fully prevent abuse. Currently marketed abuse-deterrent opioid products are intended to deter manipulation for the purpose of snorting, smoking or injecting of the active ingredient. Compared with immediate-release formulations, extended-release (ER) products contain higher amounts of the active drug ingredient, because the drug is intended to be released in the body over an extended period of time (up to 12 hours). When an ER mechanism can be defeated so that most or all of the active ingredient becomes immediately available (for example, by crushing, grinding or dissolving), the product becomes particularly attractive for abuse by injection or by oral or nasal administration.
The purpose of this study was to estimate the real-world rate of nonmedical use (NMU) of Xtampza ER (a Schedule II drug with abuse-deterrent properties introduced to the US market in Q3 2016) and comparator prescription oxycodone-containing products (other oxycodone ER products with abuse deterrent properties and oxycodone IR products) in a population of adult patients evaluated for substance abuse treatment.
Methods
A cross-sectional surveillance study design was used to examine NMU of Xtampza ER and comparator prescription oxycodone products among adults aged 18 years or older assessed for substance abuse problems and treatment planning using the Addiction Severity Index-Multimedia Version (ASI-MV®) assessment tool. The study included ASI-MV assessments completed from 01 July 2016 (Q3 2016) through 31 December 2019 (Q4 2019), representing a 3.5-year time period. Xtampza ER was added to the ASI-MV tool on 17 September 2017. The primary outcome of the study was past 30-day NMU of Xtampza ER (alone or in combination with other prescription opioids) and comparator opioids (other oxycodone ER and oxycodone IR), overall and by specific routes of administration (i.e., oral, snorting, smoking, and injecting). NMU is defined as use in any way or for any other reason than as prescribed, or use without the user’s own prescription. Rates were adjusted for volume of assessments (per 100 ASI-MV assessments) and for drug utilization (per 100,000 prescriptions dispensed; data from IQVIA).
The strengths of this data source include (1) access to a hard-to-reach, enriched population of opioid users, (2) data collection via a clinical tool used in standard work flow that captures product-specific utilization (using pictures and product names) and route of administration, (3) large sample of assessments during the study period. Limitations of this study include reliance on self-report for use and product identification, sample is obtained from sites that use ASI-MV in clinical practice and may not be representative of all individuals evaluated for substance abuse treatment or users not seeking treatment.
Results
During the study period 647 sites located in 44 states contributed 192,810 assessments to the ASI-MV network. A total of 42,279 assessments (21.9%) indicated past 30-day NMU of at least one prescription opioid. The majority of these patients were male (52.0%), ages 18 to 34 years (58.1%), and Caucasian race (77.7%). Less than 1% of those reporting prescription opioid NMU specified past 30-day use of Xtampza ER (N=73; 0.2%). Past 30-day NMU rates of Xtampza ER per 100 ASI-MV assessments ranged from 0.01 (Q3 2017) to 0.10 (Q1 2018), oxycodone ER NMU rates ranged from 1.25 (Q4 2019) to 2.97 (Q4 2016), and oxycodone IR NMU rates ranged from 10.87 (Q4 2019) to 23.37 (Q3 2016) mentions per 100 ASI-MV assessments. All quarterly Xtampza ER NMU rates per 100 ASI-MV assessments were significantly lower than those for other oxycodone ER and oxycodone IR. Past 30-day oxycodone IR NMU quarterly rates per 100 ASI-MV assessments were significantly higher than all other groups.
When adjusting for the volume of prescriptions dispensed during the study period, past 30-day NMU of Xtampza ER was reported at rates between 4.46 (Q4 2018) and 31.10 (Q4 2017), other oxycodone ER NMU rates ranged from 38.65 (Q4 2019) to 59.94 (Q3 2016), oxycodone IR NMU rates ranged from 16.35 (Q4 2019) to 36.37 (Q3 2016) mentions per 100,000 prescriptions. Overall, Xtampza ER rates were significantly lower than quarterly rates observed for other oxycodone ER NMU but not significantly lower than oxycodone IR NMU rates.
Nonmedical users of Xtampza were less likely to report any non-oral route of administration (28.8%) compared to nonmedical users of other oxycodone ER products (57.9%) and nonmedical users of oxycodone IR products (60.1%). Specifically, snorting and injecting were reported less frequently for Xtampza ER NMU (17.8% and 6.8%, respectively) compared to other oxycodone ER NMU (31.9% reported snorting and 21.9% reported injecting) and oxycodone IR NMU (40.6% reported snorting and 15.5% reported injecting).
Conclusions
The ability to provide effective pain management therapy while reducing the risk of opioid misuse and abuse continues to be a challenge for medical professionals. Oxycodone-containing products are some of the most commonly prescribed opioids. Xtampza ER, an opioid with abuse deterrent properties, had significantly lower rates of NMU, including by non-oral routes, than other oxycodone ER products and oxycodone IR products in a population of individuals seeking substance abuse treatment. Selection of specific opioid product for mitigating the risk of NMU should be a consideration in managing patients with pain.