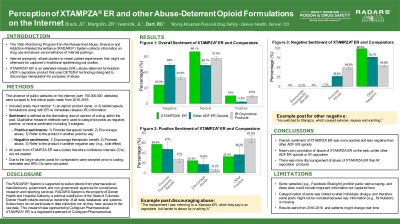 Rocky Mountain Poison and Drug Safety, Denver, CO, USA
Purpose
Opioid abuse-deterrent formulations (ADF) were developed to impede tampering with the tablet formulation with the intention of reducing the improper use of opioids. Patient experiences and impressions among the online community can inform an understanding of the effectiveness and safety of these medications. The internet is used to communicate about use of these medications, and internet anonymity allows posters to reveal experiences that would not otherwise be captured in traditional epidemiological studies. XTAMPZA ER is an extended-release (ER), abuse-deterrent formulation of oxycodone product that uses DETERx® technology designed to reduce tampering. Past work using the Web Monitoring Program from the Researched Abuse, Diversion and Addiction-Related Surveillance (RADARS®) System has shown that sentiment of posts discussing XTAMPZA ER promote the therapeutic benefits or safe use of a drug more so than posts about other ER ADF products. The goal of this study is to build on past work and determine the manner in which web discussion promotes or discourages therapeutic use of XTAMPZA ER and comparators.
Methods
The universe of public websites on the internet (over 150,000,000 websites) was scraped to find online posts made from 2018-2019 regarding XTAMPZA ER, other extended-release (ER) ADF opioid tablet products, immediate-release (IR) oxycodone, and single-entity IR oxycodone. The other ER ADF opioid product group includes posts mentioning: OxyContin®, EMBEDA®, Hysingla® ER, MORPHABOND® ER, and ARYMO® ER. Only posts involving substantive, personal discussion were included; posts without substantive discussion (e.g., spam, news articles, and advertisements) were removed. Additionally, posts must mention 1) an explicit product name, or 2) tablet/capsule formulations along with release type to be included. This likely resulted in an undercount for ER non-ADF opioid product group, the IR oxycodone group, and the single-entity IR oxycodone group. Sentiment is defined as the dominating view or opinion of a drug within the post. Previously used qualitative research methods were used to categorize posts as negative, positive, or neutral sentiment. Positive and negative sentiments were further broken down into mutually exclusive categories of sentiment. Positive sentiment must 1) promote therapeutic benefit, 2) discourage abuse, or 3) refer to a product in a positive another way. Posts were reviewed first to determine if they promoted therapeutic benefit or discouraged abuse; if it didn’t, the post was classified as positive in another way. Negative sentiment must 1) discourage therapeutic benefit, 2) promote abuse, or 3) refer to a product in another negative way. Posts were reviewed first to determine if they discouraged therapeutic benefit or promoted abuse; if it didn’t, the post was classified as negative in another way. Neutral sentiments are when the post has no predominant opinion or the sentiment cannot be determined. All posts discussing XTAMPZA ER were coded and therefore values are exact. Due to the large volume of posts for comparators, a stratified random sample was taken prior to coding, and estimates of total numbers of posts were calculated along with 95% confidence intervals (CI).
Results
A total of 369 XTAMPZA ER posts were observed. The percentages of posts that conveyed negative sentiment (encouraging inappropriate use, ineffectiveness, or side effects) were 23.8% for XTAMPZA ER, 49.0% (CI:46.6-51.5) for ER ADF products, and 32.9% (CI: 30.7-35.1) for IR oxycodone products. The percentages of posts that conveyed positive sentiment (encouraging safe use) were 10.0% for XTAMPZA ER, 2.2% (CI: 1.5-2.9) for ER ADF products, and 9.5% (CI: 8.1-10.9) for IR oxycodone. The percentages of posts that conveyed neutral sentiment were 66.1% for XTAMPZA ER, 48.7% (CI: 46.3-51.2) for ER ADF products, and 57.6% (CI: 55.3-59.9) for IR oxycodone. There were too few posts identifying the single-entity IR oxycodone group (n=31) to calculate percentages.
Among posts discussing XTAMPZA ER positively, 21 posts (56.8%) promoted the therapeutic benefit and 9 posts (24.3%) discouraged abuse typically by promoting the abuse deterrent properties. An example post that discourages abuse was, “Insurance won't pay for Xtampza, even though the abuse-deterrent properties have been established as better than other ER oxycodone. However, insurers are seeing this, and are making the switch.” The remainder (12 posts, or 32.4%) referenced it positively in another manner, often in an unqualified manner; an example post was, “Consider Xtampza if you do well with oxycodone.” These percentages were significantly higher than analogous percentages for IR oxycodone. Among posts discussing IR oxycodone positively, 27.0% (CI: 20.2-33.8) promoted therapeutic benefit and 6.1% (CI: 2.4-9.8) discouraged abuse. There was no significant difference between proportions discussing therapeutic benefit or proportions discouraging abuse between XTAMPZA ER and other ER ADF products. Among posts discussing ER ADF products positively, 47.0% (CI: 30.7-63.3) promoted therapeutic benefit and 16.8% (CI: 4.5-29.1) discouraged abuse.
Among posts that discussed XTAMPZA ER negatively, there were no posts discouraging therapeutic benefit and only a single post (1.1%) promoted abuse. The remainder (87 posts, or 98.9%) referenced XTAMPZA ER negatively in another manner, often by referencing side effects or referring to a lack of insurance coverage. An example post referencing side effects was, “He switched to Xtampza, which caused extreme nausea and vomiting.” The proportion of posts promoting abuse for XTAMPZA ER was significantly lower than IR oxycodone, 49.5% (CI: 45.4-53.6), and ER ADF products, 26.6% (CI: 23.5-29.7). Similar to XTAMPZA ER, there was little discouraging of therapeutic benefits among posts for IR oxycodone or ER ADF products (0 posts and 1 post, respectively).
Conclusions
Individuals’ stated perceptions of abuse are likely to align with their behaviors.Negative sentiment (encouraging inappropriate use, ineffectiveness, or side effects) of XTAMPZA ER was much less prevalent than for other ER ADF opioid products. Among posts discussing XTAMPZA ER negatively, there was nearly zero encouragement of abuse, unlike posts discussing ER ADF products or IR oxycodone. Conversely, there was proportionally more discussion of discouragement of abuse for XTAMPZA products than for IR oxycodone. These results could indicate that abuse of XTAMPZA ER is less desirable for abuse than other ER ADF products or IR oxycodone.
The comprehensiveness of the public web search was a key strength of this analysis. However, some websites (e.g., personal Facebook pages, Bluelight) prohibit public web scraping, and these sites could include important information not captured here. Furthermore, categorization of posts is limited to what individuals divulge, and therefore some posts might not be included in the groupings because key information (e.g., formulation) was missing.