4 - Abuse of XTAMPZA® ER relative to other opioid analgesics 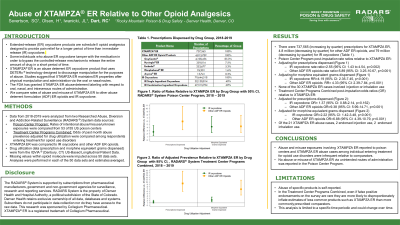 1Rocky Mountain Poison & Drug Safety – Denver Health and Hospital Authority, Denver, CO, USA. 2University of Colorado School of Medicine, Aurora, CO, USA
Purpose
Extended-release (ER) oxycodone products are schedule II opioid analgesics designed to provide steady pain relief over several hours. However, these products can become preferred drugs for abuse because they contain a large amount of active pharmaceutical ingredient. Some individuals who abuse ER oxycodone tamper with the medication in order to bypass the controlled-release mechanism to release the entire amount of drug in a short period of time. Products that are more difficult to manipulate may be effective at reducing abuse via tampering and/or unintended routes of administration. XTAMPZA® ER is an abuse deterrent ER oxycodone product that uses DETERx® technology designed to discourage tampering. Studies suggest that XTAMPZA ER maintains ER properties after physical manipulation and administration via the oral or nasal routes. The FDA has granted XTAMPZA ER abuse-deterrent labeling with respect to oral, nasal, and intravenous routes of administration. This study compares rates of abuse and misuse of XTAMPZA ER to other ER opioid analgesics and other forms of oxycodone.
Methods
Data collected from 2018 through 2019 were analyzed from two Researched Abuse, Diversion and Addiction-Related Surveillance (RADARS®) System data sources: the Poison Center Program and the Treatment Center Programs Combined. The Poison Center Program obtains information on exposures from 53 of 55 poison centers within the United States. Information obtained includes the reason for exposure, the route of administration, and the product involved in the exposure. In the Treatment Center Programs Combined, respondents entering treatment for opioid use disorders complete a questionnaire where they select the drugs they abused in the past month from a list of prescription medications. Respondents are also asked to select the routes by which they administered the product (e.g. snorted, injected). XTAMPZA® ER was compared to two groups: other abuse deterrent formulation (ADF) ER opioids and immediate-release (IR) oxycodone. ADF ER opioids included OxyContin®, Embeda®, Hysingla® ER, Arymo® ER, and MorphaBond™ ER. In the Poison Center Program, rates of intentional abuse/misuse/unknown exposures per prescriptions dispensed and morphine equivalent grams dispensed were compared between drug groups. In the Treatment Center Programs Combined, odds of past month abuse adjusted for prescriptions dispensed and morphine equivalent grams dispensed were compared between drug groups. Prescriptions dispensed and morphine equivalent grams dispensed information was obtained from the IQVIA® (Danbury, CT) US-Based Longitudinal Patient Data. The percentage of cases where product and formulation was unknown was high for both programs and different across active pharmaceutical ingredients. Ignoring missing data would lead to biased estimates of differences between drug groups. Using multiple imputation, drug group proportions within observed data were used to estimate missing values by active pharmaceutical ingredient across 50 data sets. Analyses were performed in each of the 50 data sets and estimates averaged.
Results
From 2018 through 2019, there were 737,565 (increasing by quarter) prescriptions for XTAMPZA ER, 4.8 million (decreasing by quarter) for other ADF ER opioids, and 79 million (decreasing by quarter) for IR oxycodone.
In the Poison Center Program, exposure rates per prescription dispensed for comparator opioids were all statistically significantly greater than for XTAMPZA ER. Relative to XTAMPZA ER, the rate ratio for IR oxycodone was 2.55 (95% CI: 1.43 to 4.54, p=0.002), and other ADF ER opioids was 5.89 (95% CI: 3.25-10.67, p<0.001). Adjusting for morphine equivalent grams dispensed, the rate ratio for IR oxycodone was 4.19 (95% CI: 2.35-7.45, p<0.001) and other ADF ER opioids was 4.33 (95% CI: 2.39-7.84, p<0.001). None of the 30 XTAMPZA ER exposure cases involved injection or inhalation use.
In the Treatment Center Programs Combined, the odds of a respondent endorsing other ADF ER opioids was 9.38 (95% CI: 5.99-14.71, p<0.001) greater than for XTAMPZA ER. Odds of endorsing IR oxycodone was greater than XTAMPZA ER but the difference was not statistically significant (odds ratio (OR)=1.37, 95% CI: 0.88-2.14, p=0.162). Odds ratios adjusted for morphine equivalent grams dispensed for all comparator opioids were greater than for XTAMPZA ER: IR oxycodone (OR=2.22, 95% CI: 1.42-3.48, p<0.001) and other ADF ER opioids (OR=6.88, 95% CI: 4.39-10.79, p<0.001). Of the 21 cases endorsing past month abuse of XTAMPZA ER, 2 cases reported use via injection, 2 report use via inhalation in the past month. The proportion of cases reporting abuse through unintended routes was lower than comparators.
Conclusions
Abuse and misuse exposures involving XTAMPZA ER reported to poison centers and XTAMPZA ER abuse cases among individual entering treatment for opioid use disorders are infrequent relative to comparators. No abuse or misuse of XTAMPZA ER via unintended routes of administration was reported in the Poison Center Program. The proportion of cases involving use via unintended routes of administration tended to be lower for XTAMPZA ER than for comparator drug groups among individuals entering treatment for opioid use disorders. A notable limitation of these analyses is that abuse of specific products is self-reported. In the Treatment Center Programs Combined, even if false positive endorsements on the survey are rare they are more likely to disproportionately inflate estimates of less common products such as XTAMPZA ER than more commonly prescribed comparators. Noting these limitations, continued monitoring in these surveillance systems can aid in identifying changes in abuse and misuse of XTAMPXA ER and other opioid analgesics.