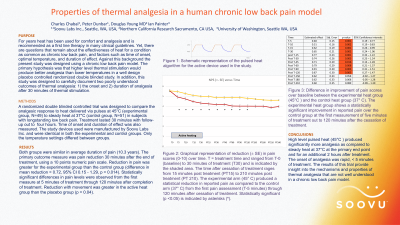 1Soovu Labs Inc., Seattle, WA, USA. 2Soovu Labs Inc., Seattle, WA, USA. 3University of Washington, Seattle, WA, USA. 4Northern California Research Inst., Sacramento, CA, USA
Purpose
For years heat has been used for comfort and analgesia and is recommended as a first line therapy in many clinical guidelines. Yet, there are questions that remain about the actual effectiveness of heat for a condition as common as chronic low back pain, and factors such as time of onset, optimal temperature, and duration of effect. Against this background the present study was designed using a chronic low back pain model. The primary hypothesis was that higher level thermal stimulation would produce better analgesia than lower temperatures in a well design placebo controlled randomized double blinded study. In addition, this study was designed to carefully document two poorly understood outcomes of thermal analgesia: 1) the onset and 2) duration of analgesia after 30 minutes of thermal stimulation.
Methods
A randomized double blinded controlled trial was designed to compare the analgesic response to heat delivered via pulses at 45℃ (experimental group, N=49) to steady heat at 37℃ (control group, N=51) in subjects with longstanding low back pain. Treatment lasted 30 minutes with follow-up out to four hours. The hypothesis was that the experimental group would experience a higher degree of analgesia compared to the control group. Time of onset and duration of effect was also measured. The study devices used were manufactured by Soovu Labs Inc. and were identical in both the experimental and control groups. Only the temperature settings differed between groups.
Results
Both groups were similar in average duration of pain (10.3 years). The primary outcome measure was pain reduction 30 minutes after the end of treatment, using a 10 points numeric pain scale. Reduction in pain was greater for the experimental group than the control group (difference in mean reduction = 0.72, 95% CI 0.15 - 1.29, p = 0.014). Statistically significant differences in pain levels were observed from the first measure at 5 minutes of treatment through 120 minutes after completion of treatment. Reduction with movement was greater in the active heat group than the placebo group (p = 0.04).
Conclusions
High level pulsed heat (45℃) produced significantly more analgesia as compared to steady heat at 37℃ at the primary end point and for an additional 2 hours after treatment. The onset of analgesia was rapid, < 5 minutes of treatment. The results of this trial provide insight into the mechanisms and properties of thermal analgesia that are not well understood in a chronic low back pain model.