12 - Thermal analgesia, exploring the boundary between pain relief and nociception 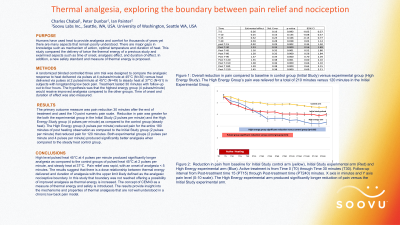 1Soovu Labs Inc., Seattle, WA, USA. 2Soovu labs Inc., Seattle, WA, USA. 3Northern California Research Inst., Sacramento, CA, USA. 4University of Washington, Seattle, WA, USA
Purpose
Humans have used heat to provide analgesia and comfort for thousands of years yet there are many aspects that remain poorly understood. There are major gaps in knowledge such as mechanism of action, optimal temperature and duration of heat. This study compared the delivery of twice the thermal energy of a previous study and examined aspects such as time of onset, analgesic effect, and duration of effect. In addition, a new safety standard and measure of thermal energy is proposed.
Methods
A randomized blinded controlled three arm trial was designed to compare the analgesic response to heat delivered via pulses at 4 pulses/minute at 45℃ (N=30) versus heat delivered via pulses at 2 pulses/minute at 45℃ (N=49) to steady heat at 37℃ (N=51) in subjects with longstanding low back pain. Treatment lasted 30 minutes with follow-up out to four hours. The hypothesis was that the highest energy group (4 pulses/minute) would receive improved analgesia compared to the other groups. Time of onset and duration of effect was also measured.
Results
The primary outcome measure was pain reduction 30 minutes after the end of treatment and used the 10 point numeric pain scale. Reduction in pain was greater for the both the experimental group in the Initial Study (2 pulses per minute) and the High Energy Study group (4pulses per minute) as compared to the control group (steady heat). The High Energy group (4 pulses per minute) reduced pain for the entire 180 minutes of post heating observation as compared to the Initial Study group (2 pulses per minute) that reduced pain for 120 minutes. The reduction in pain in the High Energy group was greater than that in the experimental group in the Initial Study but did not reach statistical significance. Both experimental groups (2 pulses per minute and 4 pulses per minute) produced significantly better analgesia when compared to the steady heat control group.
Conclusions
High level pulsed heat 45℃ at 4 pulses per minute produced significantly longer analgesia as compared to the control groups of pulsed heat 45℃ at 2 pulses per minute, and steady heat at 37℃. Pain relief was rapid, with an onset of analgesia < 5 minutes. The results suggest that there is a dose relationship between thermal energy delivered and duration of analgesia with the upper limit likely defined as the analgesic nociceptive boundary. In this study that boundary was not reached offering a possibility of improved analgesia as thermal energy is increased. However, increased thermal energy requires a better standardized approach to user safety. The concept of CEM43 as a measure of thermal energy and safety is introduced. The results provide insight into the mechanisms and properties of thermal analgesia that are not well understood in a chronic low back pain model.