22 - Efficacy and safety of NTM-006 in a randomized, double-blind, placebo- and active-controlled trial in moderate to severe pain after third molar extraction. Meaningful and sustained analgesia over 24h demonstrated for a single dose (1000 mg) of NTM-006, an NCE with a novel non-opioid/non-NSAID mechanism of action. 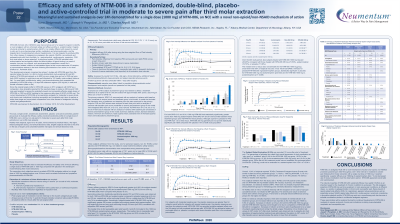 1Neumentum, Inc., Palo Alto, California, USA. 2NEMA Research, Inc., Naples, Florida, USA. 3Albany Medical Center - Department of Neurology, Albany, New York, USA
Purpose
NTM-006 (formerly JNJ-10450232) was discovered as part of a research program to identify a novel analgesic with an enhanced safety and efficacy profile vs. acetaminophen. Despite structural similarity to acetaminophen (APAP), it is notably different with respect to overall in-vitro and in-vivo pharmacologic profile, metabolism and pharmacokinetics, and the targeted lack of acetaminophen-induced hepatotoxicity. It is also targeted to positively differ from other classes of analgesics/co-analgesics like opioids, NSAIDs, cannabinoids and gabapentinoids with their shortfalls (i.e., gastrointestinal, cardiovascular, respiratory, CNS, renal safety or abuse potential). In preclinical models, NTM-006 exhibited clear antinociceptive and antipyretic effects but little inhibition of ligand binding in a panel of receptor, enzyme, ion-channel, and neurotransmitter transporters, except for a concentration-related inhibition of radio-labelled ligand at the human adenosine A3 receptor, at concentrations attained in the brain following administration of an active in vivo dose (data on file).
The development program comprised two phase 1 studies with NTM-006 apart from the reported phase 2a study: In a first-in-human double-blind study exploring SD and MD kinetics, NTM-006 administered up to 6000 mg as a single dose and up to 2500 mg twice daily (5000 mg/day) for eight days was well tolerated by 102 healthy male subjects (Gelotte et al, TBC).
An open-label, multiple-dose, safety, and pharmacokinetics study assessed the tolerability of NTM-006 under a 10 days MD treatment regimen (500 mg bid) in male and female volunteers (Vakil et al, TBC)
Since the original target profile for NTM-006 was as an OTC analgesic with APAP as a comparator, dose strengths selected for the reported phase 2a study (ie 250 mg and 1000 mg) were targeted to assess the potentially lowest and comparably effective single doses of NTM-006 vs .1000 mg APAP (relating to the maximum daily dose of APAP of 4000 mg).The current development of NTM-006 as a prescription analgesic for moderate to severe acute and chronic pain indications (including neuropathic pain) aims to explore a wider dose range and more potent comparators from other classes of analgesics including opioids and gabapentinoids.
NTM-006 was licensed to Neumentum, Inc. in October. 2019, for further development.
Methods
This was a single-center, randomized, double-blind, placebo- and active-controlled, parallel group study to evaluate the efficacy, safety and pharmacokinetic profile of a single dose of NTM-006, over a 24-hour on-site period in moderate to severe pain after third molar extractions in up to 280 male subjects.
Extraction of a minimum of three third-molars was required:


Safety: Assessed by results from ECGs, vital signs, clinical laboratory, additional hepatic aminotransferase/bilirubin measurements and subject-reported adverse events.
A follow-up phone call was scheduled within 7 days after surgery.
Pharmacokinetic samples were taken linked to population pharmacokinetic model development and analysis.
Statistical Methods: A sample size of 66 subjects by treatment group was needed to detect a treatment difference at an alpha level of 0.05 (two-sided) with approximately 90% power, assuming an effect size of 0.57 for SPID 0-6.
Results
Population/Demographics
Overall, 269 subjects were randomized to IMP: 66 (NTM-006 1000 mg), 69 (NTM-006 250 mg), 67 (acetaminophen 1000 mg), and 67 (placebo).
Three subjects withdrew from the study, one for personal reasons, two for AEs.
Demographic/baseline characteristics were comparable among treatment groups: All male, average age 19.1 years, 251 (93.3%) Caucasian.
At baseline, 51.3% (138/269) reported severe pain (mean PI-NRS score of 7.6).
Efficacy
Primary efficacy endpoint: SPID 0-6 was significantly greater (p<0.001) for subjects treated with 1000 mg NTM-006 (20.56) and acetaminophen 1000 mg (20.75) but not 250 mg NTM-006 (8.95) when compared with placebo (4.37).
Secondary endpoints: statistically significantly greater PID and PAR scores were observed for both 1000 mg NTM-006 and acetaminophen compared to placebo beginning at 45 min and 30 min, respectively, while continuing through 24h on a stable level for NTM-006 and only 7h for acetaminophen.
Accordingly, for both SPID 0-12 and 0-24, 1000 mg NTM-006 had statistically significantly greater scores than 1000 mg acetaminophen while SPID 0-4 and 0-8 were similar between these treatment groups (and also TOTPAR for these periods.)
The median time to first perceptible pain relief was 45.2 and 28.3 minutes for the 1000 mg NTM-006 and acetaminophen groups, respectively.
Over the 24h study period, less subjects treated with NTM-006 1000 mg rescued (45.45%) compared with those treated with NTM-006 250 mg (73.53%), acetaminophen (72.73%), or placebo (71.86%).
The median time to rescue was not estimable for the NTM-006 1000 mg group, since fewer than 50% of subjects rescued. It was 109.0/129.0/468.5 minutes for placebo/NTM-006 250 mg/acetaminophen groups, statistically significant vs placebo for NTM-006 1000 mg and acetaminophen (p≤0.042) and for NTM-006 1000 mg vs. acetaminophen (pSafety
Overall, 13.4% of subjects reported AEs with similar incidences among treatment groups: 7 (10.6%) - 1000 mg NTM-006, 7 (10.1%) - 250 mg NTM-006, 10 (14.9%) - acetaminophen, and 12 (17.9%) placebo. No serious AEs or deaths were reported. Two subjects withdrew from the study due to AEs (one with pyrexia under placebo and one NTM-006 250 mg-treated subject with nausea, dizziness, and headache exacerbation, not rated as related to IMP). The most common AE was increased bilirubin reported by 5.9% of subjects. All AEs were of mild or moderate intensity with the exception of one case of syncope considered severe, not related to IMP (placebo). There were no clinically relevant differences among groups for vital signs and ECGs.
Conclusions
NTM-006, an analgesic NCE with a novel mechanism of action (non-opioid, non-NSAID) provided sustained pain relief throughout a 24 h time interval in moderate to severe pain following third molar extraction with a single oral dose of 1000 mg. It exerted significantly superior efficacy over 1000mg of acetaminophen after 7 h and decreased use of rescue medication over the observation period. NTM-006 appeared overall safe and well-tolerated.
The natural properties of NTM-006 with sustained efficacy may qualify it further as an important asset for the treatment of chronic in addition to acute pain. The full analgesic potential of NTM-006 has yet to be explored, in more severe pain conditions, at different doses, vs. opioids or gabapentinoids in chronic and neuropathic pain. Being devoid of opioid-related side effects (CNS, GI, respiratory), apparent abuse potential as well as potentially serious NSAID-related side effects (GI, cardiovascular, renal) and considering a favorable metabolic profile, NTM-006 may work as a monotherapy and also become a suitable combination partner in multimodal analgesic regimens.
These opportunities will be explored during the continued development of NTM-006 in moderate to severe acute and chronic pain indications including musculoskeletal and neuropathic pain.