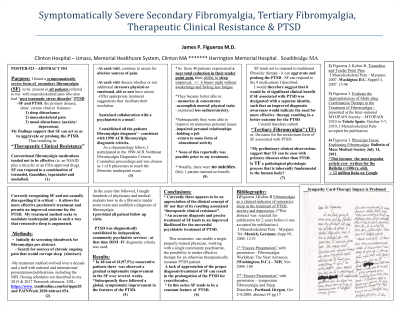 Given the severity of the SF, treatment using conventional fibromyalgia medications tended not to be effective (ie. an NSAID plus a tricyclic or an FDA approved drug). SF, I found, will respond to a combination of tramadol, tizanidine, tapentadol and modafinil which I described in my abstracts at PAINWeek 2015 & 2017. If SF is ignored and/or not successfully treated, it can influence the primary disease, PTSD - SF appears to aggravate those clinical features shared with the primary disease thus resulting in “therapeutic clinical resistance”, which will symptomatically worsen the PTSD as well as contribute to prolonging it.
Correctly recognizing SF and not casually disregarding it is critical and will allow for more effective psychiatric treatment and permit an improved outcome for the PTSD. My treatment method seeks to modulate tender point pain and augment restorative sleep.
Methods
Initially I do screening bloodwork for fibromyalgia - ESR, CBC, chem-profile, uric acid, TSH, rheumatoid factor, ANA, and any other historically relevant testing, i.e. thyroid autoantibodies, Lyme disease testing etc. Search for sources of chronic ongoing pain that would corrupt sleep - such as obesity with pes planus and associated chronically painful bursitis (anserine, trochanteric), tarsal sinus syndrome and SI joint strain, etc.
My treatment method evolved over a decade and a half with national and international presentations/publications, including the NIH. These are the dosing schedules described in my 2015 & 2017 PAINWeek abstracts:
A combination of tramadol 50-100 mg TID and tizanidine capsules 4-8mg QHS. The tender point exam is repeated at each visit documenting any physical manifestation of improvement. The patient needs to achieve at least 6 hours of uninterrupted sleep, feeling rested on awakening. Non PTSD patients typically respond to the aforementioned, PTSD patients do not. Occasionally I use the FIQR, to assess for benefit. For PTSD patients, I add tapentadol 50 mg PO QHS for 2 nights, observe if benefit is achieved, if not increase the dose to 100 mg - subsequent dose increases only as appropriate if necessary. Finally if mental clarity remains an issue, the addition of modafinil 100- 200mg PO QAM can be beneficial. Also the patient should be assessed for ulterior sources of pain at each visit – bursitis, tendonitis, plantar fasciitis etc., which could ulteriorly disrupt sleep. At each visit it is necessary to discuss with the patient as to whether or not additional stressors physical or emotional have arisen, offering appropriate treatment suggestions that facilitate their resolution. Sustained collaboration with a psychiatrist is a must.
I established the patients fibromyalgia diagnosis - consistent with 1990 ACR fibromyalgia diagnostic criteria. As a rheumatology fellow, I participated in the 1990 ACR Northeast Fibromyalgia Diagnostic Criteria Committee proceedings and was chosen as 1 of 8 physicians to teach the fibrositic tender point exam. I provided all patient follow up visits in this series.
PTSD was diagnostically established by independent, community psychiatric services - at that time DSM -IV diagnostic criteria was used.
Results
In 40 out of 41(97.5%) consecutive patients there was observed a gradual symptomatic improvement in the SF. Subsequently there followed a global, symptomatic improvement in the features of the PTSD.
Initially as these 40 patients experienced a near total reduction in their tender point pain contemporaneously their ability to sleep improved to approximately 6 hours/ night without awakenings and feeling less fatigue on awakening. They became better able to memorize, concentrate, accomplish mental and physical tasks - they expressed less sadness/anxiety. Subsequently they were able to improve numerous personal issues - impaired personal relationships, hold a job or return to some form of educational activity. None of this reportedly was possible prior to my treatment. Notably, there were no suicides. Only 1 patient claimed no benefit.
Conclusions
Currently there appears to be no appreciation of the clinical concept of SF nor that of the associated “therapeutic resistance”. An accurate diagnosis and treatment of SF lends to a successful psychiatric treatment of PTSD. This awareness can enable a single physician, working with a community psychiatrist, the possibility to render effective therapy for an otherwise therapeutically resistant PTSD patient. In those patients I treated, the previous lack of appreciation of the proper diagnosis/treatment of SF resulted in the prolongation of the PTSD for years/decades. Of interest, in this series of patients, SF tends to be a constant feature of PTSD. SF tends not to respond to traditional fibrositic therapy and can act to both aggravate and prolong the PTSD. SF can respond to the 4 medications I described but not to traditional fibrositic therapeutics. I would therefore suggest that it would be of significant clinical benefit if SF associated with PTSD was designated with a separate identity such that a better diagnostic awareness and that more effective therapy is required. I would therefore submit the name of “tertiary fibromyalgia” for that the recalcitrant form of SF associated with PTSD.