27 - Effects of Induction and Maintenance Ketamine Infusions in CRPS Patients 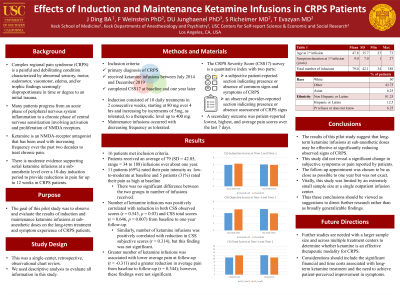 1Keck School of Medicine, Los Angeles, CA, USA. 2Keck Medical Center of University of Southern California, Department of Anesthesiology and Psychiatry, Los Angeles, CA, USA. 3University of Southern California Dornsife Center for Self-Report Science & Center for Economic and Social Research, Los Angeles, CA, USA. 4Keck Medical Center of University of Southern California, Department of Anesthesiology, Los Angeles, CA, USA
Purpose
Complex regional pain syndrome (CRPS) is a painful and debilitating condition characterized by abnormal sensory, motor, sudomotor, vasomotor, edema, and/or trophic findings seemingly disproportionate in time or degree to an initial trauma. Many patients progress from an acute phase of peripheral nervous system inflammation to a chronic phase of central nervous sensitization involving activation and proliferation of NMDA receptors. Ketamine is an NMDA-receptor antagonist that has been used with increasing frequency over the past two decades to treat chronic pain. There is moderate evidence supporting serial ketamine infusions at a sub-anesthetic level over a 10-day induction period to provide reductions in pain that persist for up to 12 weeks in CRPS patients. The goal of this study was to observe and evaluate the results of induction and maintenance ketamine infusions on the treatment and longer-term symptom experience of complex regional pain syndrome in an outpatient clinic.
Methods
This is a single-center, retrospective, observational chart review. Patients were included if they had a primary diagnosis of CRPS, received induction and maintenance ketamine infusions between July 2014 and December 2019, and completed a CRPS Severity Score (CSS) survey at the first infusion visit and at a subsequent visit about one year later. The CSS17 is a quantitative index with three parts: a subjective patient-reported section indicating presence or absence of common signs and symptoms of CRPS; an observed provider-reported section indicating presence or absence assessment of CRPS signs; patient-reported lowest, highest, and average pain scores over the last 7 days. We used descriptive analysis to evaluate all information in this study.
Results
16 patients met inclusion criteria and were included in this study. Patients received an average of 79 (SD = 42.05, range = 34 to 188) infusions over the course of about one year. 11 patients (69%) rated their pain intensity as low to moderate at baseline and 5 patients (31%) rated their pain as high at baseline; there was no significant difference between the two groups in the number of infusions received. Number of ketamine infusions was positively correlated with reduction in CSS scores from baseline to one-year follow-up. Specifically, the more ketamine infusions a patient received, the greater the reduction in CSS observed scores (r = 0.543, p = 0.03) and in CSS total scores (r = 0.646, p = 0.007), indicating an improvement in CRPS signs. Although the pattern of results was similar for subjective, patient-perceived changes in CSS scores (r = 0.314), the results were not significant. Similarly, although more ketamine infusions were associated with less average pain at follow-up (r = -0.311) and a greater reduction in average pain from baseline to follow-up (r = 0.344), these findings did not reach statistical significance.
Conclusions
The results of this pilot study suggest that long-term ketamine infusions at sub-anesthetic doses given over a one-year period significantly reduced observed CRPS signs but did not significantly change subjective symptoms or pain. Further studies are needed with a larger sample size to determine whether ketamine is an effective therapeutic modality for CRPS considering the significant financial and time costs associated with the treatment and the need to achieve patient-perceived improvement in symptom experience.