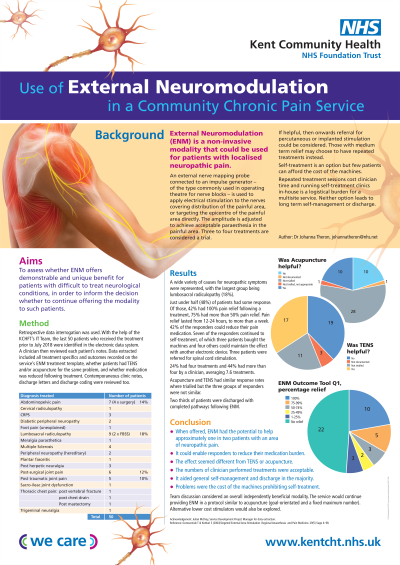 Kent Community Health NHS Foundation Trust, Maidstone, Kent, United Kingdom
Purpose
To assess whether External Neuromodulation (ENM) offers a demonstrable and unique benefit for patients with difficult-to-treat neurological conditions, in order to inform the decision whether to continue offering the modality to such patients as part of their treatment pathway in a multi-disciplinary community-based chronic pain management service.
Background
ENM is a non-invasive modality that could be utilised for patients with localised neuropathic pain. An external nerve mapping probe connected to an impulse generator, of the type commonly used in operating theatre for nerve blocks, is used to apply electrical stimulation to the nerves covering distribution of the painful area, or targeting the epicentre of the painful area directly. The amplitude is adjusted to achieve acceptable paraesthesia in the painful area. Three to 4 treatments are considered a trial.
If helpful, then onwards referral for percutaneous or implanted stimulation could be considered. Those with medium term relief may choose to have repeated treatments instead. Self-treatment is an option but few patients can afford the cost of the machines. Repeated treatment sessions cost clinician time and running self-treatment clinics in-house is a logistical burden for a multi-site service. There was concern that neither option would lead to long term self-management or discharge.
Methods
Retrospective data interrogation was used. With the help of the health trust’s IT department, the last 50 patients who received the treatment prior to July 2018 were identified in the electronic data system. A clinician then reviewed each patient’s notes, making use of Excel spreadsheets. Data extracted included all treatment specifics and outcomes recorded on the service’s ENM treatment template, whether patients also had TENS and/ or acupuncture for the same problem, and whether medication was reduced following treatment. Contemporaneous clinic notes, discharge letters and discharge coding were reviewed too.
Results
A wide variety of causes for neuropathic symptoms were represented, with the largest group being lumbosacral radiculopathy (18 %).
Just under half (48 %) of patients had some positive response. Of those, 42 % had 100 % pain relief following a treatment, 75 % had more than 50 % pain relief. Trial period pain relief lasted from 12-24 hours, to more than one week after a single treatment. 42 % of those with a positive response could reduce their pain medication. Seven of the responders continued to self-treatment, of which 3 patients bought the machines and 4 others could maintain the effect with another electronic device. Three patients were referred onwards for spinal cord stimulation.
24 % had 4 treatments and 44% had more than 4 treatments by a clinician, averaging 7.6 treatments. Those having less than 4 treatments, were where the treatment caused pain or no effect.
Acupuncture and TENS each had similar overall success rates where trialled. However, individual patients did not respond in the same way to the different modalities and they thus did not seem interchangeable.
Two thirds of patients were discharged with completed pathways following ENM.
Conclusions
Team discussion considered an overall independently beneficial modality. The service would continue providing ENM in a protocol similar to how we offer acupuncture (goal-orientated and a fixed maximum number). Alternative lower cost stimulators would also be explored.