30 - Nonpharmaceutical Fentanyl Analogs in the Illicit Drug Trade: Where are We Heading? 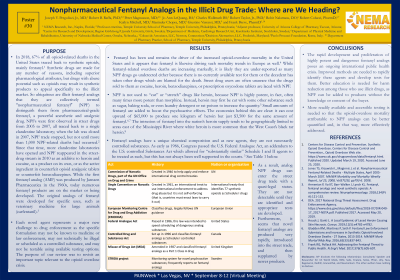 1NEMA Research, Inc., Naples, Florida, USA. 2Temple University School of Pharmacy, Philadelphia, Pennsylvania, USA. 3University of Arizona College of Pharmacy, Tucson, Arizona, USA. 4Uppsala University, Gavleborg, Gavle, Sweden. 5Karolinska Institutet, Stockholm, Sweden. 6University of Nebraska Medical Center, Omaha, Nebraska, USA. 7Colucci and Associates, Newton, Connecticut, USA. 8Decision Alternatives, LLC, Frederick, Maryland, USA. 9Paolo Procacci Foundation, Rome, Italy. 10Temple University Department of Pharmacy Practice, Philadelphia, Pennsylvania, USA
Purpose
In 2018, 67% of all opioid-related deaths in the United States traced back to synthetic opioids, mainly fentanyl.1 Synthetic drugs are made for any number of reasons, including superior pharmacological attributes, but drugs with abuse potential such as opioids may result in synthetic products to appeal specifically to the illicit market. So ubiquitous are illicit fentanyl analogs that they are collectively termed “nonpharmaceutical fentanyl” (NPF) to distinguish them from pharmaceutical-grade fentanyl, a powerful anesthetic and analgesic drug. NPFs were first observed in street drugs from 2005 to 2007, all traced back to a single clandestine laboratory; when the lab was closed in 2007, NPF trade stopped, but not until more than 1,000 NPF-related deaths had occurred.2 Since that time, more clandestine laboratories have opened and NPF reappeared in the street-drug stream in 2010 as an additive to heroin and cocaine, as a product on its own, or as the active ingredient in counterfeit opioid analgesic tablets or counterfeit benzodiazepines. While the first fentanyl analog (AMF) was produced by Janssen Pharmaceutica in the 1960s, today numerous fentanyl products are on the market or being developed. The original analogs of fentanyl were developed for specific uses, such as veterinary medicine for large animals (carfentanil).3
Each novel agent represents a major new challenge to drug enforcement as the specific formulation may not be known to medicine or law enforcement, may not technically be illegal or scheduled as a controlled substance, and may not be testable using available testing options. The purpose of our review was to revisit an important topic relevant to the opioid overdose crisis.
Methods
This was a literature review using the PubMed database of medical journals using the search terms “fentanyl analogs” and “illicit fentanyl.” We also searched the websites of the Centers for Disease Control and Prevention, the Drug Enforcement Agency, and the Food and Drug Administration. A narrative review of the materials with an emphasis on newest findings was presented.
Results
Fentanyl has been and remains the driver of the increased opioid-overdose mortality in the United States and it appears that fentanyl is likewise driving such mortality trends in Europe as well.4 While fentanyl-related overdose deaths are increasing markedly, it is likely they are under-reported as many NPF drugs go undetected either because there is no currently available test for them or the decedent has taken other drugs which are blamed for the death. Street drug users are often unaware that the drugs sold to them as cocaine, heroin, benzodiazepines, or prescription oxycodone tablets are laced with NPF.
NPF is not used to “cut” or “stretch” drugs like heroin, because NPF is highly potent, in fact, often many times more potent than morphine. Instead, heroin may first be cut with some other substance such as sugar, baking soda, or even laundry detergent or rat poison to increase the quantity.5 Small amounts of fentanyl are added to boost the psychoactive effects. The economics behind this are clear: it can cost upward of $65,000 to produce one kilogram of heroin but just $3,500 for the same amount of fentanyl.6,7 The intrusion of fentanyl into the nation’s heroin supply tends to be geographically limited to areas east of the Mississippi River where white heroin is more common than the West Coast’s black tar heroin.8
Fentanyl analogs have a unique chemical composition and as new agents, they are not necessarily controlled substances. As early as 1986, Congress passed the U.S. Federal Analogue Act, an addendum to the U.S. controlled Substances Act which allowed for “substantially similar” Schedule I and II agents to be treated as such, but this has not always been well supported in the courts.3
As a result, analog NPF drugs can enter the street drug trade with a quasi-legal status. They are not detectable until they are identified and appropriate tests are developed. Furthermore, it seems that novel fentanyl analogs are produced very rapidly, introduced into the street trade, and then supplanted by newer products once the older versions are discovered.
Conclusions
The rapid development and proliferation of highly potent and dangerous fentanyl analogs poses an ongoing international public health crisis. Improved methods are needed to rapidly identify these agents and develop tests for them. Better education is needed for harm reduction among those who use illicit drugs, as NPF can be added to products without the knowledge or consent of the buyer. More readily available and accessible testing is needed so that the opioid-overdose mortality attributable to NPF analogs can be better quantified and, in that way, more effectively addressed.