31 - What is the Role of Buprenorphine in the Era of Abuse Deterrent Formulations? 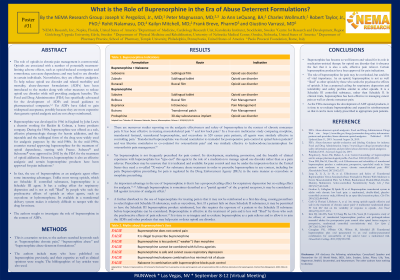 1NEMA Research, Inc., Naples, Florida, USA. 2Karolinska Institutet, Stockholm, Sweden. 3Uppssala University, Gavle, Sweden. 4University of Nebraska Medical Center, Omaha, Nebraska, USA. 5Temple University School of Pharmacy, Philadelphia, Pennsylvania, USA. 6Paolo Procacci Foundation, Rome, Italy
Purpose
The role of opioids in chronic pain management is controversial. Opioids are associated with a number of potentially treatment-limiting adverse effects, such as opioid-induced constipation and somnolence; can cause dependence; and may lead to use disorder in certain individuals. Nevertheless, they are effective analgesics. To help reduce opioid use disorder and related morbidity and mortality, abuse-deterrent formulations (ADFs) have been introduced to the market along with other measures to reduce opioid use disorder while still providing analgesic benefits. The Food and Drug Administration (FDA) has specifically advocated for the development of ADFs and issued guidance to pharmaceutical companies.1,2 Yet ADFs have failed to gain widespread acceptance, possibly because they are more expensive than generic opioid analgesic and are not always reimbursed.
Buprenorphine was developed in 1966 in England by John Lewis a chemist working for Reckitt & Colman, a home products company. During the 1980s, buprenorphine was offered as a safe, effective pharmacologic therapy for heroin addiction, and the injectable and the sublingual form of the drug were widely used for analgesic purposes by the mid-1980s. In the mid-1990s, countries started approving buprenorphine for the treatment of opioid dependence, starting with France. Subutex® and Suboxone® were approved in 2002 by the FDA for the treatment of opioid addiction. However, buprenorphine is also an effective analgesic and certain buprenorphine products have been approved for pain indications.3
In fact, the use of buprenorphine as an analgesic agent offers some interesting advantages. Unlike most strong opioids, which are Schedule II controlled substances, buprenorphine is a Schedule III agent. It has a ceiling effect for respiratory depression and is not as well “liked” by people who seek the psychoactive effects of opioids as other agents, such as oxycodone or hydromorphone. Its available in a transdermal delivery system makes it relatively difficult to tamper with the drug for misuse.
The authors sought to investigate the role of buprenorphine in the context of ADFs.
Methods

This is a narrative review, so the authors searched keywords such as “buprenorphine chronic pain,” “buprenorphine abuse” and “buprenorphine abuse-deterrent formulations.” The authors include many who have published on buprenorphine previously, and their expertise as well as clinical opinions were sought. The bibliographies of key articles were also used.
Results
There are numerous studies reporting on the analgesic effectiveness and safety of buprenorphine in the context of chronic noncancer pain. It has been effective in treating musculoskeletal pain4,5 and low back pain.6 In a four-arm multicenter study comparing morphine, transdermal fentanyl, transdermal buprenorphine, and oxycodone in 520 cancer pain patients, all agents were similarly effective in controlling pain.7 Transdermal buprenorphine was found noninferior to tramadol for postoperative pain control in spinal fusion patients8 and was likewise noninferior to co-codamol for osteoarthritis pain9 and was similarly effective to hydrocodone/acetaminophen for osteoarthritis pain management.10
Yet buprenorphine is not frequently prescribed for pain control. Its development, marketing, promotion, and the breadth of clinical experience with buprenorphine has “type-cast” this agent in the role of a medication to manage opioid use disorder rather than as a pain reliever. Prescribers may be unaware that it is indicated and available for pain control and may be under the impression that in the United States they need a so-called “X-waiver” for substance abuse treatment in order to prescribe buprenorphine in any context, including for pain. Buprenorphine prescribing for pain is regulated by the Drug Enforcement Agency (DEA) in the same manner as oxycodone or morphine prescribing.
An important advantage in the use of buprenorphine is that it has a proposed ceiling effect for respiratory depression but no ceiling effect for analgesia.11,12 Although buprenorphine is sometimes described as a “partial agonist” of the μ-opioid receptors, it may be considered a full agonist in terms of analgesic effect.3
A further drawback to the use of buprenorphine for treating pain is that it may not be reimbursed as a first-line drug, causing prescribers to select higher-risk Schedule II substances, such as oxycodone, first. If a patient fails on these Schedule II substances, it may be permitted to have the Schedule III buprenorphine product reimbursed, but this requires the exposure of a patient to the Schedule II substance before buprenorphine can be considered.
Buprenorphine is effective in the treatment of pain and is less well “liked” by those who seek the psychoactive effects of pain relievers.13 It is time to re-imagine and re-evaluate buprenorphine as a pain reliever and to allow it to join the ADFs and other products that may help resist or deter opioid use disorder.
Conclusions
Buprenorphine has become so well-known and valued for its role in medication-assisted therapy for opioid use disorder that it obscures the fact that it is also a safe, effective pain reliever. Certain buprenorphine products have been approved for pain indications. The role of buprenorphine for pain may be overlooked, but could be of vital importance. As an opioid, buprenorphine is not as well “liked” as other opioids by those who seeks the psychoactive effects of opioids. It has a proposed ceiling for respiratory depression and tolerability and safety profiles similar to other opioids. It is a Schedule III controlled substance, rather than Schedule II. In clinical trials, buprenorphine has been effective in managing cancer pain as well as chronic noncancer pain. As the FDA encourages the development of ADF opioid products, it is time to re-evaluate buprenorphine and expand its reimbursement so that it can be more widely prescribed to appropriate pain patients.