33 - Medication-Assisted Therapy for Opioid Use Disorder: A Review of Established Treatments and New Directions 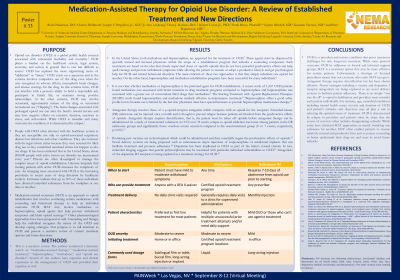 1University of Nebraska Medical Center, Omaha, Nebraska, USA. 2NEMA Research, Inc., Naples, Florida, USA. 3Mariano Medical Pain/Addiction Consultants, West Hartford, Connecticut, USA. 4Temple University School of Pharmacy Practice, Philadelphia, Pennsylvania, USA. 5Paolo Procacci Foundation, Rome, Italy. 6Uppsala University, Gavle, Sweden. 7Karolinska Institutet, Stockholm, Sweden
Purpose
Opioid use disorder (OUD) is a global public health concern associated with substantial morbidity and mortality.1 OUD places a burden on the healthcare system, legal system, economy, and society in general that is vast but difficult to assess.2 OUD exists on a spectrum and at the extreme involves compulsive use of the drug even when the user recognizes its adverse effects, neuroplastic brain changes, and intense cravings for the drug. In this extreme form, OUD can interfere with a person’s ability to hold a responsible job, participate in family life, or maintain strong positive relationships. At the other extreme, OUD may involve occasional, opportunistic misuse of the drug or occasional recreational use (“chipping”). The brain changes associated with prolonged opioid use can alter the brain’s reward circuits and may have negative effects on executive function, reactions to stress, and self-control. While OUD is treatable and many overcome the condition, it is characterized by relapse.3
People with OUD often intersect with the healthcare system as they are susceptible not only to opioid-associated respiratory distress but infections and other conditions. They also intersect with the legal system either because they were arrested for illicit drug use or they committed unrelated crimes but happen to also use drugs. It has been estimated that in the United States, about 200,000 people with active heroin use disorder are incarcerated every year.4 Prisons are often ill-equipped to manage the complex issues of opioid rehabilitation. Likewise hospitals find treating patients with active OUD increases the complexity of care.
Medication-assisted treatment (MAT) is an approach to opioid rehabilitation that involves combining certain medications with counseling and behavioral therapy to help an individual overcome OUD. MAT may involve methadone or buprenorphine, opioid agents that help prevent withdrawal symptoms and blunt opioid cravings.5,6 Other pharmacological approaches have been proposed as well. Counseling and therapy help the individual recognize the nature of the OUD and develop coping strategies. Our purpose is to call attention to OUD and present a narrative review of current treatment options and future directions.
Methods
This is a narrative review. The authors conducted a literature search on “medication-assisted therapy,” “medication-assisted treatment,” “buprenorphine,” “methadone,” and “opioid use disorder.” Several of the authors have expertise and clinical experience in the management of OUD and provided their expertise as well.
Results
In the United States, both methadone and buprenorphine, are approved for the treatment of OUD.7 These agents must be dispensed by specially trained and licensed physicians within the scope of a rehabilitation program that includes a counseling component. The main criticism of these two approaches is that they simply substitute one opioid for another. On the other hand, buprenorphine and methadone rehabilitation programs have been successful for many individuals.8
It is not clear whether methadone or buprenorphine is the preferred agent for OUD rehabilitation. A recent study of 1,267 OUD patients found methadone was associated with better retention in drug treatment programs compared to buprenorphine and buprenorphine was associated with a greater use of concomitant illicit drugs than methadone.9 The Starting Treatment with Agonist Replacement Therapies (START) study found buprenorphine and methadone similarly effective in maintenance treatment.10 Buprenorphine offers a good safety profile but its broader use is limited by the fact that physicians must have special licensure to provide buprenorphine maintenance therapy.11
Antagonist therapy involves these of a μ-opioid-receptor antagonist which competes with an opioid for the receptors. Extended-release (ER) naltrexone can be injected once a month and is thought to prevent relapse because patients are blocked from the psychoactive effects of opioids. Antagonist therapy requires detoxification, that is, the patient must be taken off opioids before antagonist therapy can be administered. In a study of incarcerated volunteers (n=153) over 78 weeks, relapse to opioid addiction was lower among patients in the ER naltrexone groups and significantly fewer overdose events occurred compared to the usual-treatment group (0 vs. 7 events, respectively, p=0.02).12
Promising new vaccines are in development which could be administered and then essentially negate the psychoactive effects of opioids.13 Novel delivery systems are being proposed such as subcutaneous depot injections of buprenorphine or subdermal implants that can facilitate treatment and promote adherence.14 Dopamine has been implicated in OUD as part of the brain’s reward circuits. In fact, molecular imaging suggests that genetic polymorphisms may be associated with particular individual vulnerabilities to OUD.15 Antagonists of the dopamine D3 receptors are being explored as a treatment strategy for OUD.16
Conclusions
OUD is a prevalent and serious condition that poses numerous challenges for safe, long-term treatment. While some patients overcome OUD by willpower or formal and informal support groups, MAT is a treatment option that may be more effective for certain patients. Unfortunately, a shortage of licensed prescribers means that not everyone who seeks MAT can get it. Antagonist therapy requires detoxification but has been shown effective. Newer strategies including a vaccine and dopamine 3 receptor antagonism are being explored as are novel delivery systems to facilitate patient adherence. There is no simple “one size fits all” to opioid rehabilitation and providers must consider each patient individually. For instance, age, comorbid conditions including mental health status, severity and duration of OUD, and patient’s attitudes and objectives may all play a role in selecting the optimal course of treatment. OUD is characterized by relapse so providers and patients must be aware that the course of recovery often includes disappointing setbacks. While some have criticized MAT approaches as merely switching one substance for another, MAT often enables patients to resume relatively normal and productive lives and to pursue counseling to better understand their drug use and ways to avoid future setbacks.