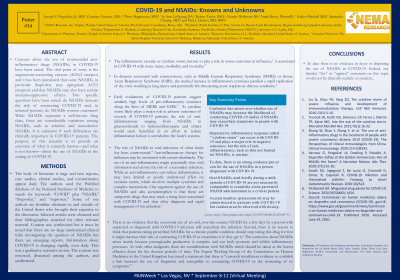 1NEMA Research, Inc., Naples, Florida, USA. 2Paolo Procacci Foundation, Rome, Italy. 3Uppsala University, Gavle, Sweden. 4Karolinska Institutet, Stockholm, Sweden. 5Temple University School of Pharmacy Practice, Philadelphia, Pennsylvania, USA. 6Decision Alternatives, LLC, Frederick, Maryland, USA. 7Johns Hopkins School of Medicine, Baltimore, Maryland, USA
Purpose
Concern about the use of nonsteroidal anti-inflammatory drugs (NSAIDs) in COVID-19 have been raised. The viral point of entry is the angiotensin-converting enzyme (ACE)2 receptor and it has been speculated that some NSAIDs, in particular ibuprofen, may upregulate ACE2 receptors and that NSAIDs may also have certain immunosuppressive effects. Two specific questions have been raised: do NSAIDs increase the risk of contracting COVID-19 and, in infected persons, do NSAIDs worsen outcomes? While NSAIDs represent a well-known drug class, there are considerable variations among NSAIDs, such as selective and nonselective NSAIDs. It is unknown if such differences are clinically important in COVID-19 patients. The purpose of this research is to provide an overview of what is currently known—and what is not known—about the use of NSAIDs in the setting of COVID-19.
Methods
The body of literature is large and new reports, case studies, clinical studies, and commentaries appear daily. The authors used the PubMed database of the National Institutes of Medicine to search for keywords “COVID” plus “NSAID,” “ibuprofen,” and “naproxen.” Some of our authors are frontline clinicians in and outside of the United States who brought their expertise to the discussion. Selected articles were obtained and their bibliographies searched for other relevant material. Content was synthesized but it must be noted that there are no large randomized clinical trials investigating the question of NSAIDs but there are emerging reports. Information about COVID-19 is changing rapidly, even daily. This was a qualitative narrative review. The content was reviewed, discussed among the authors, and synthesized.
Results
The inflammatory cascade or cytokine storm, known to play a role in worse outcomes in influenza,1 is associated in COVID-19 with tissue injury, morbidity, and mortality.2
In diseases associated with coronaviruses, such as Middle Eastern Respiratory Syndrome (MERS) or Severe Acute Respiratory Syndrome (SARS), the marked increase in inflammatory cytokines parallels a rapid replication of the virus resulting in lung injury and potentially life-threatening acute respiratory distress syndrome.3 Early evaluations of COVID-19 patients suggest similarly high levels of pro-inflammatory cytokines along the lines of MERS and SARS.3 As cytokine storm likely plays a major role in adverse outcomes of severely ill COVID-19 patients, the role of anti-inflammatories ranging from NSAIDs to glucocorticoids to hydroxychloroquine and others would seem beneficial in an effort to reduce inflammation before it overwhelms the body’s systems.
The role of NSAIDs in viral infections of other kinds has been controversial.4 Anti-inflammatory therapy for influenza may be associated with certain drawbacks. The use of an anti-inflammatory might potentially slow viral elimination and elevate the risk of a secondary infection. While an anti-inflammatory can reduce inflammation, it may have limited or poorly understood effect on cytokine storm, which involves multiple cytokines and complex interactions. One argument against the use of NSAIDs and also acetaminophen is that these are antipyretic drugs that may mask a rising fever associated with COVID-19 and thus delay diagnosis and rapid management of the infection.5
There is no evidence that the occasional use of an oral, over-the-counter NSAID for a few days by a person with suspected or diagnosed mild COVID-19 infection will exacerbate the infection. Second, there is no reason to think that patients taking prescribed NSAIDs for a chronic painful condition should stop taking this drug for fear it might increase their risk of contracting COVID-19 or exacerbate it if they get it.6 The confusion about NSAIDs arises mainly because prostaglandin production is complex and can both promote and inhibit inflammatory processes. As with other analgesics, there are considerations with NSAIDs which should be taken at the lowest effective doses for the shortest periods of time. The Expert Working Group of the Commission on Human Medicines in the United Kingdom has issued a statement that there is “currently insufficient evidence to establish a link between the use of ibuprofen and susceptible to contracting COVID-19 or the worsening of its symptoms.”7
Conclusions
To date there is no evidence in favor or disputing the use of NSAIDs in COVID-19. Indeed, any blanket “for” or “against” statement on this topic would not be clinically realistic or prudent.