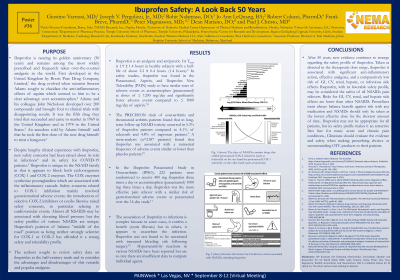 1Paolo Procacci Foundation, Rome, Italy. 2NEMA Research, Inc., Naples, Florida, USA. 3University of Nebraska Medical Center, Omaha, Nebraska, USA. 4Colucci & Associates, Newtown, Connecticut, USA. 5Temple University School of Pharmacy Practice, Philadelphia, Pennsylvania, USA. 6University of Uppsala, Gavle, Sweden. 7Karolinska Institutet, Stockholm, Sweden. 8Mariano Medical Pain/Addiction Specialists, West Hartford, Connecticut, USA. 9Johns Hopkins University School of Medicine, Baltimore, Maryland, USA
Purpose
Ibuprofen is nearing its golden anniversary (50 years) and remains among the most widely prescribed and frequently taken over-the-counter analgesic in the world. First developed in the United Kingdom by Boots Pure Drug Company, Limited,1 the drug evolved when scientist Stewart Adams sought to elucidate the anti-inflammatory effects of aspirin which seemed to him to be a clear advantage over acetaminophen.2 Adams and his colleague John Nicholson developed over 200 compounds and brought four to clinical trials with disappointing results. It was the fifth drug they tried that succeeded and came to market in 1969 in the United Kingdom and in 1974 in the United States.3 An anecdote told by Adams himself said that he took the first dose of the new drug himself to treat a hangover.1
Despite lengthy clinical experience with ibuprofen, new safety concerns had been raised about its role in infections4 and its safety for COVID-19 patients.5 Ibuprofen is unique in the NSAID family in that it appears to block both cyclooxygenase (COX) 1 and COX 2 enzymes. The COX enzymes synthesize prostaglandins which are associated with the inflammatory cascade. Safety concerns related to COX-1 inhibition mainly involved gastrointestinal adverse events; the introduction of selective COX-2 inhibitors or coxibs likewise raised safety concerns, in particular relating to cardiovascular events. Almost all NSAIDS may be associated with elevating blood pressure but the safety profiles of various NSAIDs are unique. Ibuprofen’s position of balance “middle of the road” position as being neither strongly selective for COX-1 or COX-2 has afforded it a strong safety and tolerability profile.
The authors sought to review safety data on ibuprofen at the half-century mark and to consider the advantages and disadvantages of this versatile and popular analgesic.
Methods
Articles were obtained via PubMed search in June of 2019 through the searching various keywords. “Ibuprofen safety gastrointestinal” resulted 223, “ibuprofen safety cardiovascular” resulted 122, “ibuprofen safety renal” resulted 111, “ibuprofen safety infection” resulted 35, and “ibuprofen Streptococcus” resulted 35. Bibliographies of certain articles were also searched. Cost-effectiveness studies, and non-safety aspect of analgesia studies were excluded along with studies exclusively on pediatric, geriatric, or special populations like patent ductus arteriosus patients were excluded. Non-English studies without full text translation were also excluded. Articles focusing on major safety concerns of ibuprofen were kept including meta-analyses, safety, and safety and efficacy studies. Studies published in the last ten years were emphasized. In addition, among the authors are several physicians with relevant clinical experience with analgesics whose expertise contributed to the project.
Results
Ibuprofen is an analgesic and antipyretic. Its Tmax is 1.9 ± 1.4 hours in healthy subjects with a half-life of about 2.2 ± 0.4 hours. (1.4 hours).6 In safety studies, ibuprofen was found in the Paracetamol, Aspirin, and Ibuprofen New Tolerability (PAIN) study to have similar rates of adverse events as acetaminophen (paracetamol) at doses of ≤ 1200 mg/day and significantly fewer adverse events compared to ≤ 3000 mg/day of aspirin.7,8 The PRECISION trials of osteoarthritis and rheumatoid arthritis patients found that in long-term follow-up NSAID toxicity occurred in 5.3% of ibuprofen patients compared to 4.1% of celecoxib and 4.8% of naproxen patients.9 A meta-analysis (n=2187 patients) found that ibuprofen was associated with a numerical frequency of adverse events similar or lower than placebo patients.10 In the Ibuprofen Paracetamol Study in Osteoarthritis (IPSO), 222 patients were randomized to receive 400 mg ibuprofen three times a day or acetaminophen (paracetamol) 1000 mg three times a day; ibuprofen was the more effective pain reliever with a similar risk of gastrointestinal adverse events as paracetamol over the 14-day study.11
The association of ibuprofen to infections is complex because in some cases, it confers a benefit (cystic fibrosis) but in others, it appears to exacerbate the infection. Ibuprofen was not found to be associated with increased bleeding risk following surgery.12 Hypersensitivity reactions in various NSAIDs have been reported but are so rare there are insufficient data to compare individual agents.
Conclusions
After 50 years, new evidence continues to emerge regarding the safety profile of ibuprofen. Taken as directed in the therapeutic dose range, ibuprofen is associated with significant anti-inflammatory action, effective analgesia, and a comparatively low risk of GI, CV, renal, hepatic, or infectious side effects. Ibuprofen, with its favorable safety profile, may be considered the safest of all NSAIDs pain relievers. Risks for GI, CV, renal, and hepatic side effects are lower than other NSAIDS. Prescribers must always balance benefit against risk with any medication and NSAIDs should only be taken at the lowest effective dose for the shortest amount of time.. Ibuprofen may not be appropriate for all patients, but its safety profile makes it an attractive first line for many acute and chronic pain conditions., Clinicians should evaluate the evidence and safety when making prescribing choices or recommending OTC products to their patients.