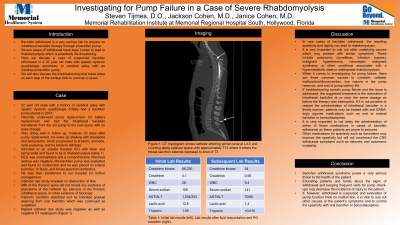 Memorial Healthcare System, Hollywood, Florida, USA
Purpose
Baclofen withdrawal is a very serious risk for anyone on intrathecal baclofen therapy through a baclofen pump. Severe cases of withdrawal have been known to lead to rhabdomyolysis which is potentially life-threatening. When a practitioner is concerned about withdrawal symptoms in a patient, it is vital to perform a comprehensive workup to find what is causing the disruption of therapy. Rarely, a cause is not found despite a thorough workup. Here we discuss a case of suspected baclofen withdrawal in a 22 year old male with spastic dystonic quadriplegia secondary to cerebral palsy with an intrathecal baclofen pump. We will also discuss the troubleshooting that takes place as each step of the workup fails to uncover a cause.
Methods
A 22 year old male with a history of cerebral palsy with spastic dystonic quadriplegia initially had a baclofen pump placed in 2013. He recently underwent pump replacement for end of life battery replacement and had the intrathecal baclofen transferred from the old pump to the new pump with no dose change. The patient was doing well in follow up, however about 20 days after the pump replacement, he woke up shaking with headache and tachycardia, which progressed to bruxism, anorexia, neck posturing, and he became lethargic. He was admitted to an outside hospital ICU with fever and tachycardia. He was found to be in rhabdomyolysis with elevated CK of 86,230, Creatinine 4.1, WBC at 28, NA at 158, AST 1,034, ALT 203, lactic acid of 12.8, and also had elevated troponin at 1.56. EEG was unremarkable and a comprehensive infectious workup was negative. His baclofen pump was evaluated and found no malfunction and he was placed on enteral baclofen, IV fluids, and broad spectrum antibiotics. He was then transferred to our hospital for further management. On admission, his CK level was 735, his CRP was 1.3, and he also had leukocytosis at 13.7. We performed a catheter dye study which revealed no obstruction of flow. MRI of the thoracic spine did not reveal any evidence of granuloma at the catheter tip, stenosis in the thoracic intrathecal space, or other evidence of blockage. Repeat catheter dye study was negative as well as negative CT myelogram. Patient’s CK and troponin trended down with IV fluids and his condition stabilized and he was discharged home. He followed up in clinic and enteral baclofen dosing was decreased from every 6 hours to every 8 hours, and eventually to every 12 hours.
Results
This patient’s symptoms of headache, tachycardia, shaking, and neck posturing in the setting of recent baclofen pump replacement raised concern for pump failure and baclofen withdrawal. Typically, signs of baclofen withdrawal appear within hours to a few days following interruption of therapy. In rare cases, the resulting spasticity and rigidity from baclofen withdrawal can lead to rhabdomyolysis. It is very important to rule out other underlying causes which may present with similar symptoms. These include autonomic dysreflexia, infection (sepsis), malignant hyperthermia, neuroleptic malignant syndrome, or other conditions associated with a hypermetabolic state or widespread rhabdomyolysis. When it comes to investigating for pump failure, there are three common causes to consider: catheter malfunction/disconnection, low volume in the pump reservoir, and end of pump battery life. The catheter dye study we performed was to evaluate for any leakage or interruption of flow through the catheter, which we did not find. The MRI of the thoracic spine was done to look for any intrathecal mass at the tip of the catheter which could also obstruct the medication flow. The pump was interrogated which noted a flex dose periodic bolus schedule and calculated 15.2 mL in the reservoir and the low battery alarm was engaged and not activated. The patient’s pump had been replaced only 20 days prior to the onset of his symptoms, so the pump battery was unlikely to be the issue. In general, if troubleshooting has revealed pump failure and the issue is addressed, the suggested treatment is the restoration of intrathecal baclofen at or near the same dosage as before the therapy was interrupted. If it is not possible to restore the administration of intrathecal baclofen in a timely manner, patients may be treated with oral GABA-ergic agonist medications such as oral or enteral baclofen or benzodiazepines. It is very important to not delay the administration of either of these medications in cases of baclofen withdrawal as these patients are prone to seizures. Other medications for spasticity such as dantrolene may improve the spasticity but will not counteract the CNS withdrawal symptoms such as seizures and autonomic instability.
Conclusions
Baclofen withdrawal syndrome poses a very serious threat to the health of the patient. Educating patients and family about the signs of withdrawal and keeping frequent visits for pump check-ups may decrease the incidence of injury to the patient. If, however, withdrawal is suspected and evaluation of pump function finds no malfunction, it is vital to rule out other causes of the patient’s symptoms and to control the spasticity with oral baclofen or benzodiazepines.