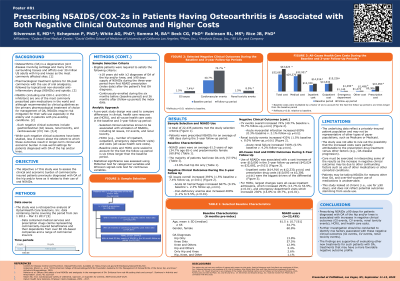 1Cedars-Sinai Medical Center, Los Angeles, CA, USA. 2David Geffen School of Medicine of University of California Los Angeles, Los Angeles, CA, USA. 3Pfizer, New York, NY, USA. 4Analysis Group, Boston, MA, USA. 5Pfizer, London, United Kingdom. 6Eli Lilly, Indianapolis, IN, USA
Purpose
Osteoarthritis (OA) is a degenerative joint disease involving cartilage and many of its surrounding tissues and afflicts over 30 million US adults with hip and knees as the most commonly affected sites. Pharmacological treatment options for OA pain commence with the use of oral analgesics, followed by topical/oral non-steroidal anti-inflammatory drugs (NSAIDs) and opioids. NSAIDs (including oral COX-1 and COX-2 inhibitors) are one of the most commonly prescribed pain medications in the world and although recommended by clinical guidelines as the primary pharmacological treatment of choice for management of OA, NSAIDs require risk mitigation for their safe use especially in the elderly and in patients with pre-existing conditions. Much is known about the potential clinical harms associated with NSAIDs use for the management of OA in the short or intermediate term, however, less is known about the extent to which these clinical outcomes and costs are pervasive and problematic in real-world settings in specific patient populations, such as those diagnosed with hip and/or knee OA. Therefore, the goal of this research is to estimate the potential clinical and economic burden of commercially insured patients diagnosed with OA of the hip and/or knee before and after being prescribed NSAIDs, in a large, national database.
Methods
This study used de-identified administrative claims records fromOptum Healthcare Solutions, Inc., a database containing healthcare and prescription drug utilization records for approximately 19 million privately insured lives from over 84 large self-insured US-based companies, spanning from January 1, 2012 to March 31, 2017 (study period). Patients included were ≥ 18 years old with ≥2 diagnoses of hip and/or knee OA, and ≥90 days supply of oral NSAIDs during the three-year period from first prescription (index date) after their first OA diagnosis. Patients were required to be continuously enrolled during the six months before (baseline period) and 36 months after (follow-up period) the index date. Selected clinical outcomes such as gastrointestinal (GI) issues, cardiovascular (CV) events, and renal toxicity were compared between the baseline and follow-up periods. All-cause healthcare costs and healthcare resource use were normalized to account for differential duration in analytic time periods. All costs were converted to and reported in 2017 US dollars using the medical care component of the Consumer Price Index. All analyses were conducted using SAS version 9.4 (SAS Institute Inc., Cary, NC). Statistical significance was assessed using McNemar test for categorical variables and Wilcoxon signed-rank test for continuous variables.
Results
Between January 1, 2014 and March 31, 2017, there were 176,431 patients with at least two diagnoses of OA of the hip/and or knee that had at least one prescription for an NSAID. A total of 34,697 OA patients had continuous eligibility during the 6-month baseline and 36-month follow-up periods. Among patients meeting the eligibility requirements, 22,435 had at least a 90 days’ supply of NSAIDs during the follow-up period and were included in this analysis. More than half of the patients were female (60.8%), had a mean age of 61.5 years and a mean Charlson Comorbidity Index of 0.4. 13.8% of patients had OA of the hip only, while 57.5% had OA of the knee only. Negative clinical outcomes associated with GI issues increased by 393% (1.5% v 7.4%, p<0.01), driven by a 667% (0.3% v 2.3%, p<0.01) increase in acute GI hemorrhages. Iron-deficiency anemia also increased 400% (1.1% to 5.5%, p<0.01). Additionally, negative clinical outcomes associated with CV events increased by 74% (40.7% v 70.7%, p<0.01), largely due to a 600% (0.3% v 2.1% p<0.01) increase in acute myocardial infarction. Hypertension experienced the largest absolute increase (40.1% to 69.6%). Lastly, negative clinical outcomes associated with renal toxicity increased by 433% (1.5% v 8.0%, p<0.01), with a 740% (0.5% v 4.2%, p<0.01) increase in acute renal failure being the largest increase.
From the baseline period to follow-up period, all-cause total healthcare costs increased by 32% ($32,682 up to $43,024, p<0.01) with prescription costs increasing by 205% ($3,306 to $10,093, p<0.01) and hospitalization costs increasing by 21% ($12,330 to $14,916, p<0.01), respectively. All-cause inpatient admissions increased 293% (13.7% to 53.9%, p<0.01), and emergency department visits increased 236% (14.8% to 49.7%, p<0.01).
Conclusions
This study found that patients with knee/hip OA who were prescribed NSAIDs experienced an increase in negative clinical outcomes and costs. These findings suggest that there is a need for newer treatments with improved clinical outcomes and less costs to patients with OA of the hip and/or knee.